Part 3: From Amateur to Expert

Following his period of study at Oxford and time of further rest away from his ministerial profession, Metcalf found himself in Taunton, Massachusetts, in 1904, where he had accepted a position at the Unitarian Church. He became associated with the Harvard Observatory around this time, no doubt driven by the prospect of connecting with such a reputable and well-established center for astronomical study in order to continue his pursuit of his love of the heavens. It was around this time that, according to Bailey, Metcalf “first became associated with the Harvard Observatory and a firm friend and admirer of Professor [Edward] Pickering[1].” This relationship with Harvard is frequently illustrated by mention of Metcalf’s discoveries and activities in the Annual Reports for the Observatory over the course of the next 15 years and beyond. The personal friendship between Metcalf and Pickering was a lasting one as well, continuing until Pickering’s death in 1919. Metcalf would also go on to become a member of the Visiting Committee of Harvard Observatory and to serve as chair of that committee for several years.

It was in Taunton that Metcalf constructed a miniature observatory at 54 Summer Street where he would he would discover 38 asteroids, his lifetime total being 41[3]. Characteristically, the telescope he used to make these discoveries was a 12-inch refracting doublet telescope for which he himself crafted the lens. 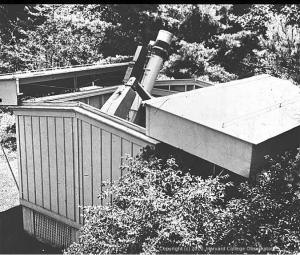 In addition to his many asteroids, Metcalf also achieved notoriety for his photography of Saturn’s moon of Phoebe. This particular achievement, “a feat not hitherto thought possible with a 12-inch instrument.[4]”, was documented in issues of the American Astronomer and Astronomische Nachricten[5] in 1909. The fact that a photograph of Phoebe had been captured with Metcalf’s 12-inch telescope was considered astounding because the next smallest telescope which had accomplished this was none other than the 24-inch Bruce telescope belonging to Harvard. The Bruce had produced the photographic plate by which Phoebe was originally discovered by the brother of Edward C. Pickering, William H. Pickering, who was overseeing Harvard’s Boyden Observatory in Arequipa, Peru, where the large photographic telescope was then in use. Despite the telescope’s size, the moon is barely distinguishable from other celestial objects if one examines the plate itself. For Metcalf to successfully capture an image of Phoebe on with an instrument half the size was nothing short of astonishing, and led Pickering to fittingly label Metcalf “[t]he most expert amateur astronomer in the country.”[6] Metcalf demonstrated resourcefulness and a strong resolve when it came to his astronomical projects that earned him the respect and repute at Harvard, and the admiration of many, including Pickering, who worked and researched there.

In addition to the many asteroids he would discover here, Metcalf also made, entirely accidently according to accounts, his first comet discovery. On November 15, 1906, as stated in the records of the Harvard Smithson Center for Astrophysics, Metcalf sighted the comet that would become know as the 97P/ Metcalf-Brewington Comet. The second name attached to the comet refers to the astronomer Howard Brewington. In 1991, Brewington used a 16-inch reflector telescope based in New Mexico to “rediscover” the comet, which hadn’t been recovered since Metcalf’s first sighting[7].

Metcalf vacationed in South Hero, Vermont, during the summer, where he did much of his lens grinding and maintained his 8-inch comet hunter telescope, also of his own design. It was from this location that Metcalf would discover the four additional comets for which he bears credit[8]. His talent for lens grinding continued to be honed to such a degree that Observatory Director Edward Pickering commissioned Metcalf to craft a 16-inch lens for use at Harvard. One must also note that Alvan Clark & Sons, an extremely reputable lens manufacturer known the world over for their quality, as Metcalf himself noted[9], was located conveniently nearby in Cambridgeport. That a man of Pickering’s standing and knowledge would trust Metcalf, a self-described amateur, instead of a prominent lens maker like Clark & Sons, with the fabrication of such an important lens, is a tremendous endorsement of the quality of his work. 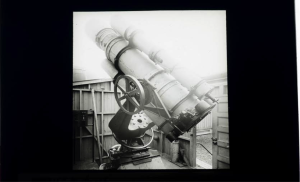 He spent a summer in Vermont undertaking this task, which his daughter fondly recalls, consumed much of his time during the days the family spent there. Of his lens-grinding Stoneham notes “[t]his highly specialized art was more a gift than a science for there was no authoritative book at that time on grinding, polishing, or computing the curves of lenses[10].” Stoneham also muses on how he would sit under trees, using a barrel and packing box as his work stations for these labors, as Metcalf meticulously checked each curve, to ensure the glass’s utmost quality[11]. He was driven by energy and enthusiasm, which he seemed to possess in an almost inexhaustible supply. “Hours and days and weeks, with the care of a surgeon during a critical operation, he smoothed the curves to a fraction of a millimeter[12]”.

When the 16-inch instrument finally entered service in 1909, it proved invaluable and would maintain a presence in the University’s Astronomical program for many decades. The meticulous technique and attention to detail that Metcalf brought to bear with the lenses he created was staggering, all the more impressive considering his “amateur” status in the field. Indeed, he was widely regarded at Harvard for his technically superior work and won praise from Pickering and later Bailey, among others. Upon the 16-inch doublet’s delivery to Harvard, Pickering remarked “the instrument is a very remarkable on, in many respects….[t]he corrections are so perfect that, by the use of curved plates, the images of stars near the corners of an 8×10 plate are as good as those near the center[13]”. Bailey would also note Metcalf’s eye for exactitude, and he commented that” he [Metcalf] not only computed his own curves for the lenses, but possessed a genius bringing them to perfection.”[14] Metcalf would move to a new ministry in Winchester, but would maintain strong ties to Harvard and continue his contributions to the Observatory’s work. The next chapter in Metcalf’s life would prove just as, if not more, fruitful for himself and all those at Harvard and elsewhere who shared in the ever-expanding desire to push the boundaries of astronomy and the possibilities for discovery it presented.

🌌🔭Our next office hour will take place on Tuesday, December 13th @ 2pm ET. Our special guest, Ken Launie, is an expert on antique telescopes who has worked with some of the historical instruments at the HCO! You can register for the Zoom meeting here ➡️https://zoom.us/meeting/82434084128

A drawing of the path of Halley's comet as seen from the Harvard College Observatory from May 27th to June 27th, 1910; from Leon Campbell's notebook titled "Halley's Comet and Variable Stars".
#projectphaedra #halleyscomet #astronomy
(image: phaedra0755)

"Wrapped in a blanket of sparkling space, an unformed star waits for its bright future to begin..." Check out my book trailer for THE FIRE OF STARS with @KirstenWLarson, coming 2/28/23! Kids & librarians will love this double readaloud!
#womeninstem #astronomy #STEM @Soaring20sPB